I am extremely tardy in writing about our visit to Remlinger's.  We actually visited several weeks ago, but I'm only updating now.  *paiseh*

We visited Remlinger Farms with our friends who are also our neighbours.  In addition to U-Picks during strawberry, raspberry and pumpkin season, they are also a little theme park.  When we visited, there were no U-Pick in season, which was just as well, as we were there for the Theme Park.

We had separately bought tickets from Groupon at a roughly 30% discount, so look out for that if you can.  We arranged to meet there at about 11 am.  However, we ran late, so arrived at about 11:30 instead. The queue was looooong.  So if you intend to visit on a weekend, be there early!

We really liked the place.  It is catered for families with young kids.  It had many rides, almost all of them suitable for younger children.  Even Little Lady, who is not very tall, qualified to take most of the rides. 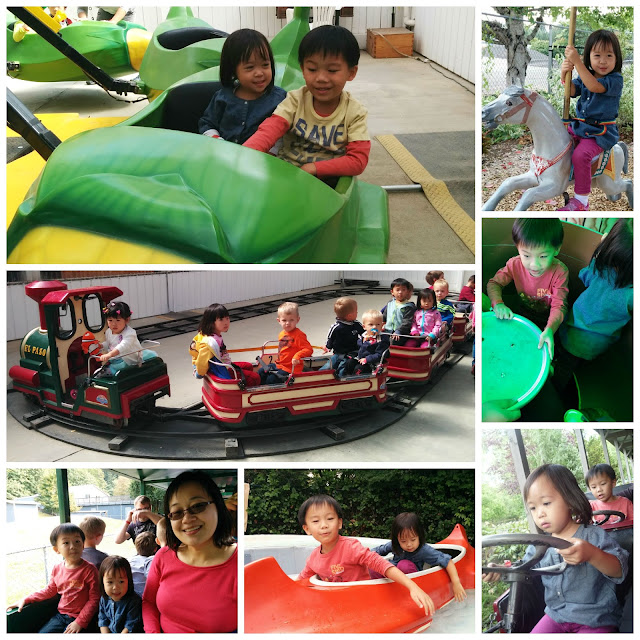 Their favourite was the one with the flying corn.  They also went on a mini train kiddy ride and a canoe ride on their own.  Little Lady had fun on a carousel, and as a family, we went on an actual train ride, sat in a spinning cup, and had a ride on antique cars.  There were more rides, such as a mini ferris wheel (which was not working that day), even a roller coaster!  We didn't have time to go on all the rides, so we'll have to return for another visit some time.

There is also a petting zoo, which I do not have pictures of, as I was queuing up for the train ride at the time.

The kiddos also went on a pony ride. The queue for the pony ride was sooooooooooooooo long.  It was worth it, though.  They had so much fun.  Little Lady was first assigned to Peaches, but her friend, whose pony came first, was too nervous to mount her pony, so Little Lady got on, to reassure her that it was not so scary after all.  I reminded Mr Cuppa to take photos since he was accompanying Little Man.  And so I got a photo of Little Man's mount, without Little Man.  Ah well.

Something that I thought really cool, and that the children had great fun in was the Hay Maze and Hay Jump. They made a maze out of hay bales, and instead of a ball pit, they had a 'hay pit', that had a climbing wall at one end.  Both kiddos had loads of fun running, jumping and falling. 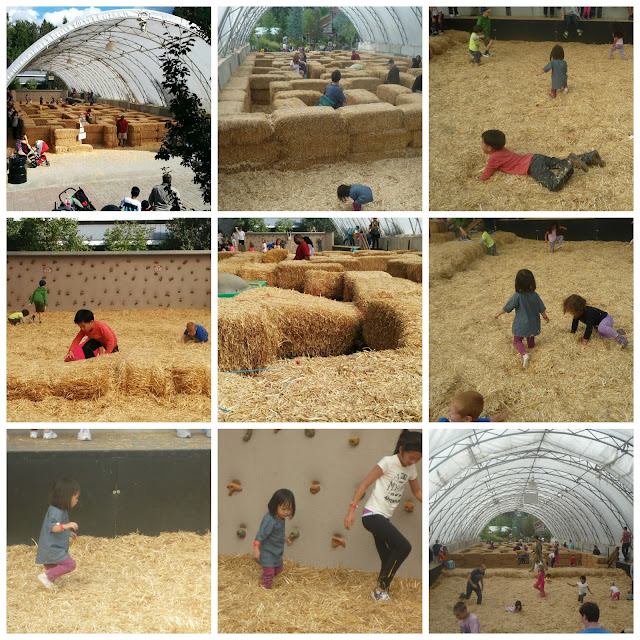 As luck would have it, the school is having a field trip the Remlinger Farms in a couple of weeks.  Yay!

In the market/gift shop, you can score very fresh fruit and vegetables, and their many varieties of pie.  We tried the Dutch Apple Pie, and it was yummy!  I was glad to see it available at our local QFC (supermarket) at the same price.

So if you're in the neighbourhood, do consider bringing your kiddos to Remlinger Farms for some wholesome fun!  Do check on their website for dates before you visit though, they're closed from mid-autumn till mid-spring.

Email ThisBlogThis!Share to TwitterShare to FacebookShare to Pinterest
Labels: Fun Friday, out and about, Seattle