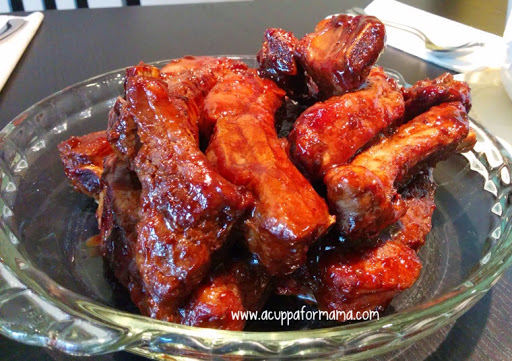 So we had guests coming over, and I hadn't planned the menu. I was craving pork ribs due to a photo on my Facebook feed. I was thinking of making that, but I did not have one of the key ingredients. And it's not like I could just get it at the supermarket. It required me to go to an Asian supermarket. That meant driving to the next city, which I was too lazy to do. (They're called cities, but are not far away. Like from Hougang to AMK. Small cities, I guess. It is much too late for me to research the definitions of city vs suburb etc right now. If they want to call themselves cities, then cities they'll be.)

Anyway, after my supermarket run to get stuff, including pork ribs (another key ingredient I didn't have), I had to go back, unload the groceries, get lunch started, pick up the children feed them, etc, etc, etc. By the time I had time to marinate these babies, it was 3:30pm. Luckily they're easy to do.

Let me just apologise here for the lack of pictures. I really need to work on that aspect of blogging.

Mix them together well.

To be honest, other than the shaosing wine, light soya sauce and water, I didn't actually measure anything else. I kinda just squirted them in. It's quite hard to go wrong, though. This combination goes well. A little bit more or less won't harm the final outcome. You could taste as you go too.

Bring the sauce to a boil. When boiling, add in the blanched pork ribs and simmer on low to medium heat for about an hour. Turn the ribs as necessary to ensure even colouring all round.

Turn the heat to high to caramalise the sauce. Make sure all ribs are coated in the caramalised sauce.

This was a tough post to write. Partly because of the subject matter, partly because I don't have long enough stretches of uninterrupted time to even formulate sentences, let alone process thought and feeling. Partly because I've been procrastinating. I've been working on it for about 2 weeks now, and it is what it is.

I will forever remember what I was doing when I got the call. I was sitting at a table with Little Lady in a little Greek place in Factoria (Little Man was with Mr Cuppa ordering) when the phone rang. When I saw that it was my brother calling, I immediately knew what the call was about. We had only WhatsApped in the 2.5 weeks since I moved to the Seattle.

Mum had been battling cancer for a little more than a year. Stage 4 kidney cancer. Kidney cancer does not respond to chemotherapy or radiotherapy, so she was put on oral drugs. The drugs kept her cancer stable. She aged a lot that year. 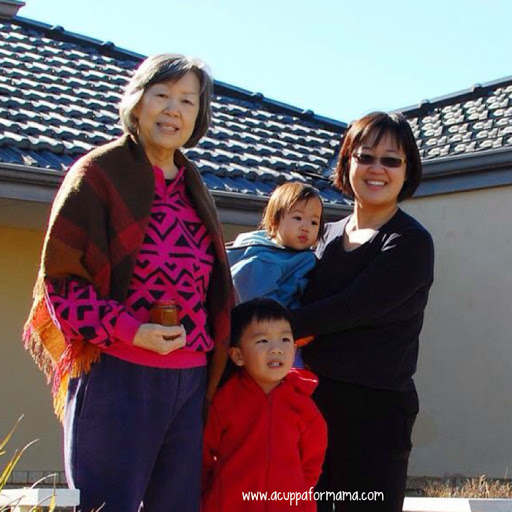 We took a family vacation to Perth in June, my brother and sister-in-law too. During that trip, Mr Cuppa was offered a job in Seattle. Mum gave us her blessings, telling us to look to the future. Mr Cuppa moved first. The kiddos and I stayed behind in Singapore. I was teaching in an tuition centre then. It wasn't nice to just up and leave a couple of months before the year end examinations. Also, it was too daunting a task to empty our place and move across the Pacific in 2 months. Besides, I wanted to spend as much time as possible with Mum. And wanted grandmother and grandchildren to have as much time together as possible, before we left for the long term. The plan was to have Mr Cuppa come back during Chinese New Year, spend some time here, then all fly off together.

Mum really wanted to have another holiday with the kids. I knew she would really miss the children once we moved to Seattle, so even though it wasn't in our budget financially or time-wise, we went to Perth again on Christmas and stayed for about 2 weeks. I think she and the children enjoyed their time together.

She had planned to spend more time in Perth after the kids and I left for Seattle, and we talked about the possibility of our flying straight to Perth.

As I had mentioned, the plan was for Mr Cuppa to come back for Chinese New Year, and then we fly off as a family after a few days. Because of the trip to Perth, I needed more time to pack up the place, so we settled on mid-March.

However, on the second day of Chinese New Year, Mum was admitted to the ICU with a particularly bad breathless attack. She was in ICU for a few days before being transferred to a normal ward. Although in the normal ward, she needed a few courses of antibiotics to kick the infection, which she eventually did.

Throughout her stay in the hospital, Mum stayed positive and her spirits were generally high. She decided to be baptised, and her joy was evident.

Although she had beaten the infection, the cancer had spread to the liver in the time she was off her medication. And because the side effects were doing her more harm than good, she and the doctor decided not to continue with it.

I didn't bring the children with me everytime I visited, because then I would be too busy minding them, rather than visiting with her. When I suggested going to visit Grandma, the children would be excited. However, once there, Little Man would get so uncooperative. He had a really hard time seeing his grandmother sick and stuck in bed.

Although we had already pushed back our departure, I agonised whether or not to push it back even further. We also had to consider Mr Cuppa's job and our visa constraints. The general consensus was that we would wait and see, but that if she continued to deteorirate, Mr Cuppa would fly back first, on our agreed date, and that the kids and I would join him later. This despite the fact that she had told me not to delay the departure further.

In one of our conversations shortly after that decision was made, she asked me again when I had delayed my departure to. Her reaction to our initial date was that of dismay. And so
I confirmed our tickets and got ready to leave the country on said date instead of delaying further.

I left on the week of National Mourning. It was tough leaving. I had seriously mixed feelings. I was very disappointed with myself that I had not managed to clear the house. I was excited to be starting a new life. LKY just passed. And then there was Mum. I was leaving her when I should be there for her. And taking her grandchildren away. I was leaving my brother to deal with a difficult situation on his own. However, it was her wish that we were out of the country. She was in the very good hands of the doctor and nurses. She and my brother had the support of my aunts and uncles, and cousins. Not the same, but...

After LKY's funeral, Mum insisted on being discharged to my Fourth Uncle's place. From all reports, she was much more relaxed there.

I got the call at lunch time on Saturday. I managed to get a ticket back to Singapore for Sunday 2pm. (Delta, because SQ would not allow online purchases this close to departure, and could not confirm availability of seat even if I were to make a trip down to the airport.)

Because of the time difference, by the time I got back to Singapore, it was early Tuesday morning. My brother picked me up and I bunked over at his place.

The funeral was on Wednesday.

I stayed at my own place after the funeral. Since I was a little jetlagged, my hours were all screwy. I'd be sleeping in the early evening, and be wide awake and packing from midnight till morning. My brother and I had a few more admin details we had to settle, and I am glad that I managed to spend some time with him. I missed the children terribly.

I managed to get rid of some more things on Saturday. After dinner at my in-law's, I went back to my brother's for the night. He sent me to the airport early in the morning for my flight back to Seattle.

Now, I'm back to my routine, keeping myself busy. I'm sometimes a little concerned that I'm not more emotional about it, but I guess a) I was plenty emotional before I even left for Seattle, b) I feel somewhat removed from it all, not being in Singapore, and c) it'll hit me when it hits me. 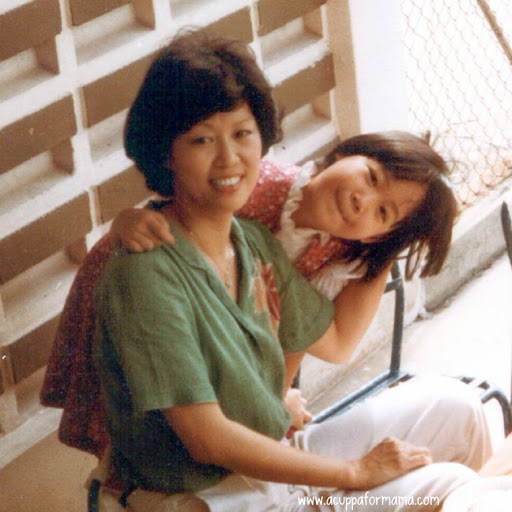 Bye Mum. I miss you so much. 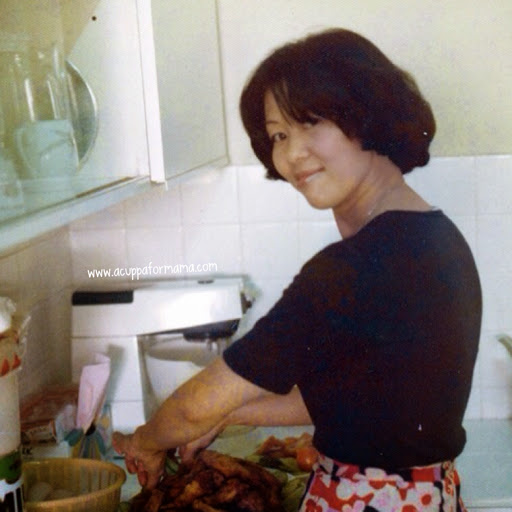 
"I wasn't intending to give an eulogy, but I have obviously changed my mind.

Initially, I didn't want to say anything because what's there to say, really? What Mum meant to me can't be captured in a few paragraphs. Why stand here and praise her, when she's not here to hear it? Besides, I didn't really want to think about it, because I'm a big crybaby.

But at the end of the day, I felt that I should say something.

Mum was a complex person. She was very strong, yet vulnerable. She was tough, demanding and had very high expectations. Yet, she was sensitive, perceptive, understanding and comforting, She was highly intelligent, and also very wise - the two do not necessarily go hand in hand. She gave great advice too, about practically everything.

But the thing that stood out most was love.

She showed her love in a multitude of ways. She cooked, she cleaned, she gifted. She took time out of her busy schedule to ferry Grandma and Second Aunt to their appointments as well as take them for outings. Through her generousity and acts of love, big and small. Through the laughter she brought, the way she taught - more than just curriculum, she taught the person, she taught values. Through her willingness to lend a listening ear, and the very good advice she gave.

I know she was deeply touched by the wonderful love shown to her by her brothers, sisters, siblings-in-law, nieces and nephews (and in-laws), especially in these last couple of months. Thank you.

The younger generatio is supposed the be more than the previous, but she's a tough act to follow. If I am only half the person Mum was, that would be good enough for me.