Round the Moon, Blue the Sky Review

Having read growingwiththetans' review of Round The Moon, Blue The Sky, I decided to go catch it with Mr Cuppa and the kiddos. 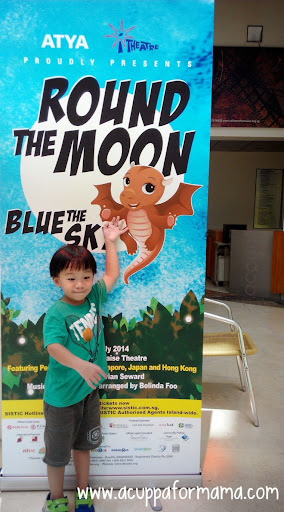 It was held at the Alliance Francais theatre, which I thought was a good sized theatre - even though we were seated near the back, we could still see everything on stage clearly. 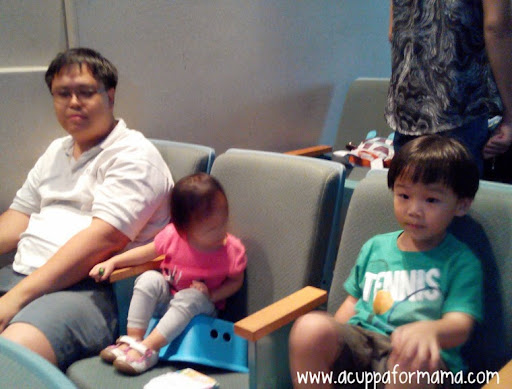 The play itself was rather interesting. The three central characters were Smallest Dragon, Leaf and Twiglet, who embody different chracteristics of young children. Smallest Dragon was very much like a curious child. Her mantra was 'Look! See! Explore! Discover!' She often went around observing and learning new things. Leaf was the playful child, always up for fun. Twiglet enjoys playing with Leaf, but can be stubborn and stuck in her ways.

The main themes that came across were learning - through play and constantly ('Look! See! Explore! Discover!'), flexibility vs absolutes (leaves are not always green, they can be brown and red too), and creativity and imagination (shapes can be combined to make different things)

The actors also interacted well with the young audience. There was also a segment where they invited two members of the audience on stage. Little Man was rather disappointed that he did not get a chance to. 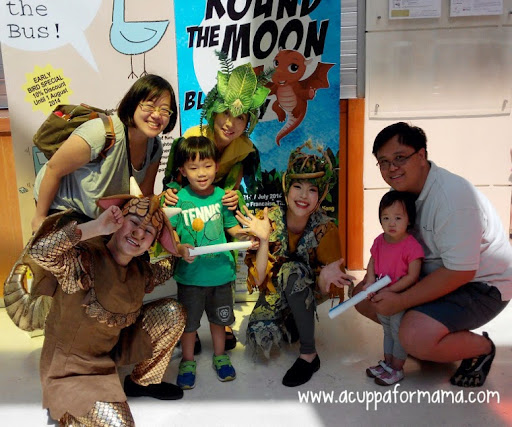 A photo with the cast.

All in, it was a fun play. Some parts were a little draggy though, both Little Man and Little Lady got a little restless. However, they enjoyed themselves overall. Little Man listed it as as 'happiest thing' for the day, and Little Lady requested for 'Smallest Dragon' the next day. I'll definitely look out for more such productions to bring the kids to.
at 15:10