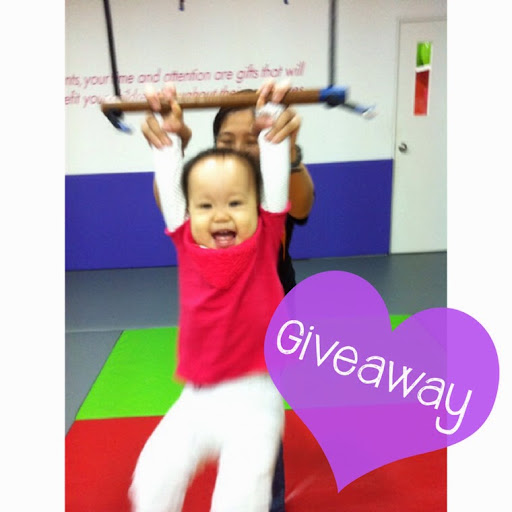 Little Lady and her absolute favourite activity - the trapeze.

I'm not really a kiasu/tiger mum (yet). Many parents I know send their children to numerous enrichment classes. Right-brain, left-brain, Maths, English, Chinese, Music, Art, Sports, etc, etc, etc, to give their kids a headstart. My children, on the other hand, got the short end of that stick. I believe in learning through play, so my kids have lots of unstructured play time.

However, as research has shown that children learn a lot before 6, I did not want to short-change them either, by not having them attend *any* classes at all, so when Little Man was younger, I signed him up for a few trial classes, both to see which he enjoyed, and to give him more stimulation (especially since I was not making my own flash cards, nor was I shelling out big bucks for ready made ones).

One class that hubby and I really liked was Gymnademics. Little Man loved it too! He wasn't so hot on the academic part to begin with, but he LOVED the physical and musical portions of the lessons. It was quite amusing to see him wandering around during the flashcard segment, and immediately taking a seat the second he heard the glockenspiel.

We liked it so much, it was never a question if Little Lady would be attending too. It was just a matter of when. Ideally, I would have liked to have had Little Lady attending classes regularly from about 8 months, around the same time that Little Man started. However, as Little Man was attending the afternoon session of kindergarten last year, it was logistically not feasible. However, now that he is in the morning session, Little Lady is attending Gymnademics regularly and loves it as much as her brother did!

Gymnademics is a unique baby class as they combine both the physical aspect ('gym') and intellectual/academics ('ademics'). The programme is based on the research of Glenn Doman, flashcard guru and baby/child brain researcher and clinician. In fact, it is the first and only intellectual and gym centre in Singapore that is affiliated with the Institutes for the Achievement of Human Potential (IAHP) which was founded by Glenn Doman. 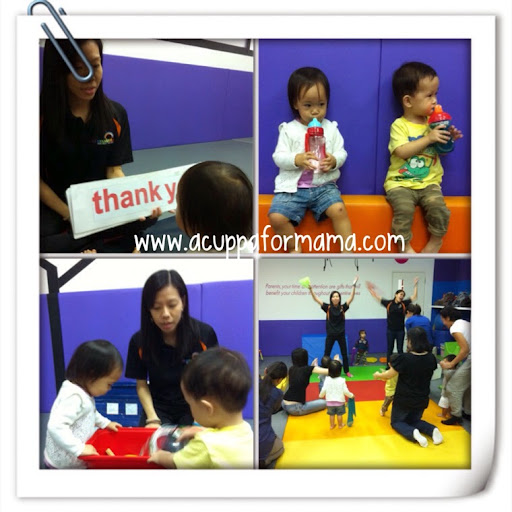 Little Lady participating in some of the activities in class.

Basically, I like it as they do almost everything - physical development, music, some maths and vocabulary thrown in as well. This way, I only have to bring the kid to *one* class, as opposed to three or four. Thus, I cannot be accused of depriving my children of their childhood by over-scheduling them. (But mainly because I am lazy.) 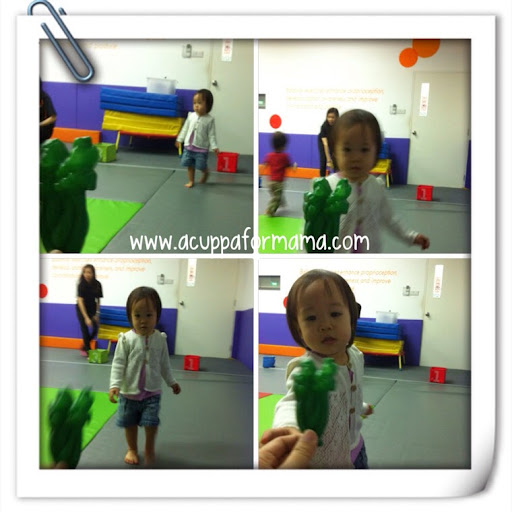 Little Lady having a stroll during the relay race.

The sessions are somewhat long, at 1 hour and 15 minutes (the industry standard seems to be 45 minutes). However, they pack a whole lot of activities in, and the children have no time to be bored at all. ("But, but... children need time for unscheduled play!", I hear some of my imaginary friends protest. Worry not, they have plenty of that when they're not in class.)

Parents are encouraged to arrive about 15 minutes earlier, so that the children have time to warm up and get used to the environment. During this time, they can either have a go at the circuit, or play with some toys. 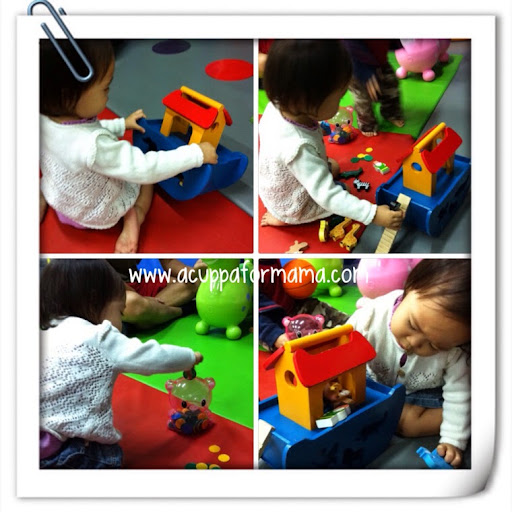 Playing with some toys before class.

As mentioned, the lessons combine physical and intellectual activities. In the intellectual portions, the children are exposed to vocabulary based on themes that are changed monthly, as well as music appreciation. This is done through word cards, picture cards, music note cards and manipulatives. 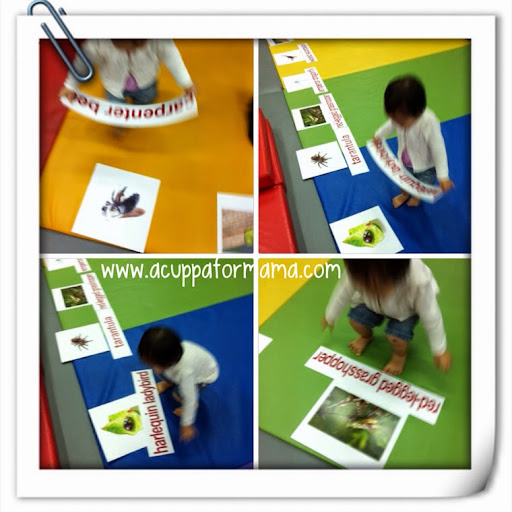 Matching words to the pictures. 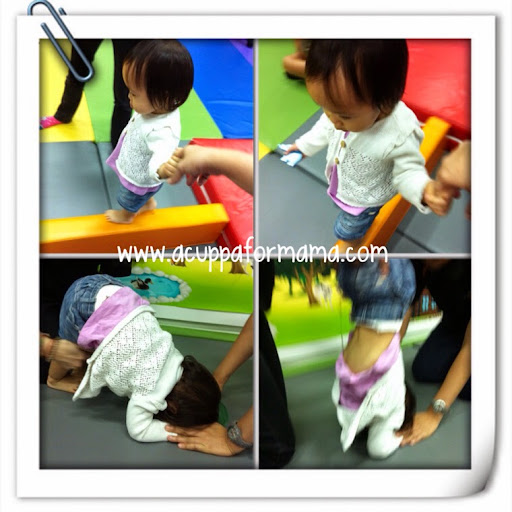 Doing a head-stand during the gymnastics portion, and walking on the beam during the obstacle course.

The physical activities, which also follow the monthly theme, focus on balance, gross and fine motor skills, as well as tactile stimulation, all of which play critical roles in a young child's brain development. 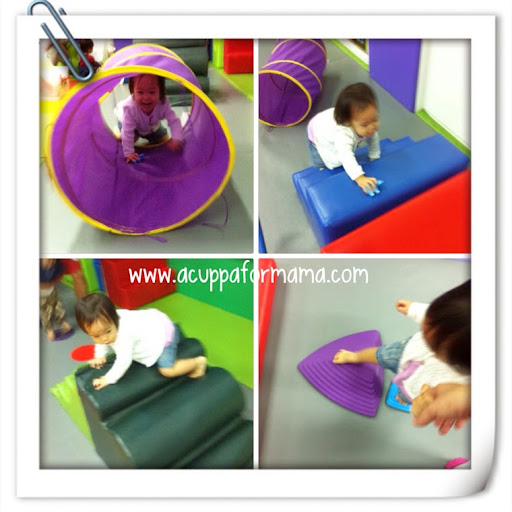 Going through the obstacle course.

One point of interest is that they alternate the physical and intellectual portions.  This is because the physical activity gets them breathing deeply, which increases the level of oxygen to the brain. This then helps them to learn better. 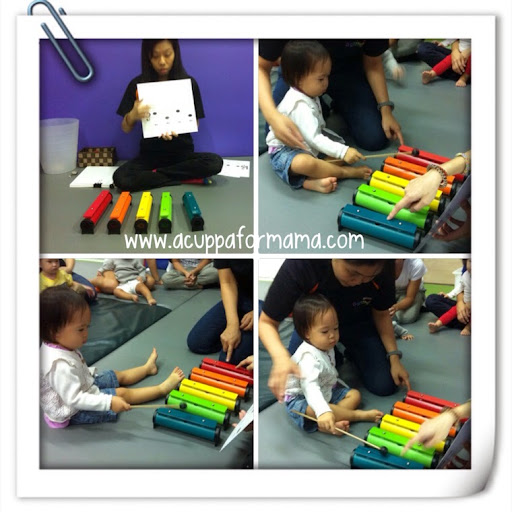 Playing on the chime bars during the music portion of the class. 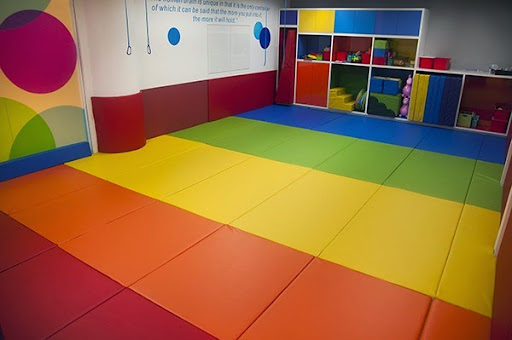 
Gymnademics is giving away a Trial Pass (worth $58)!
a Rafflecopter giveaway

This giveaway will run from 22 May to 30 May 2014 inclusive.  All entries will be verified against the entry criteria before the winner is announced.  This giveaway is only open to those residing in Singapore.

Operating hours:
Wednesday to Sunday: 9am to 5pm
(Closed on Mondays and Tuesdays)

Disclosure:  All opinions are my own.  Gymnademics did not sponsor any of the classes for the purpose of this review.