Many apologies for the late post, and for missing Time For A Cuppa this week. Things have been going on in the off-line world that made it difficult, time-wise. To make up for it, here is a colourful post! 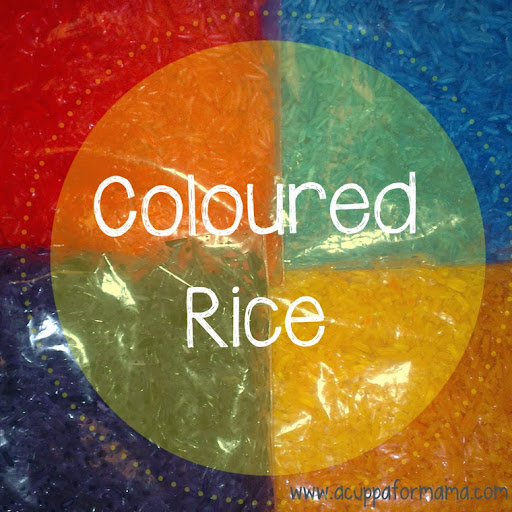 Coloured rice is really simple to make. I made it for Little Man a way back when, and forgot all about it until a friend made some for her daughter and posted it on Facebook. 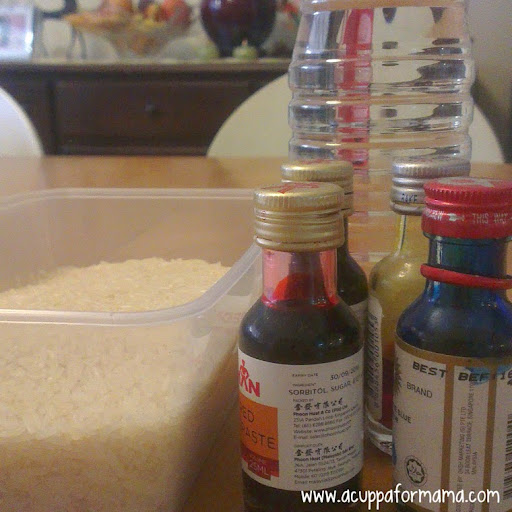 What you need:
Rice (but of course), vinegar and food colouring. You only need a tablespoonful of vinegar for every cup of rice.

How:
1) Take a tablespoon of vinegar and
2) Mix some food colouring. (Use less blue than you think you need, more red and wayyyyyy more yellow. I used 'egg yellow', which turned out more orange than yellow.)
3) Add in a cup of uncooked rice and mix well, ensuring all grains are coloured. I used zip-top bags to colour the rice in, but you could easily use a bowl.
4) Spread the coloured rice on a baking sheet to dry. I lined my baking sheets with aluminium foil first, for easier cleanup. They dried overnight. Do bear in mind that we were having a drought at that point in time. I remember they took much longer the previous time I made some. 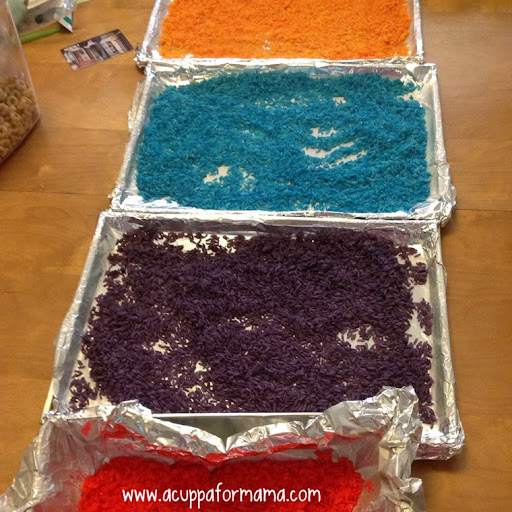 Just hanging out, waiting to dry.

The Little Ones played with the rice in a variety of ways - feeling the texture and mixing it with their fingers, scooping with a ladle, play cooking... 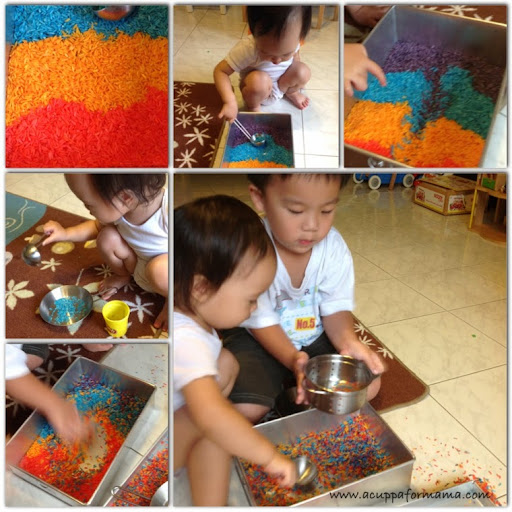 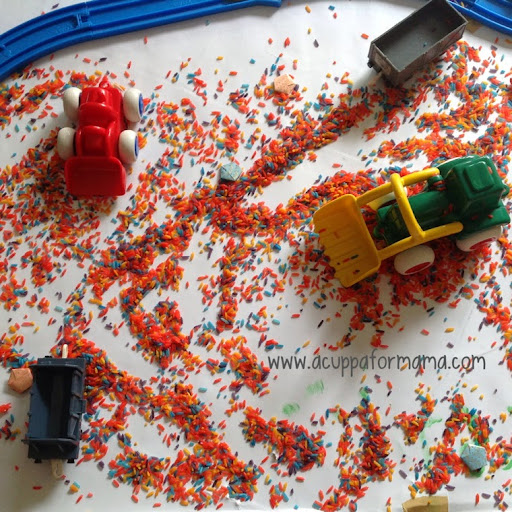 in the water table... 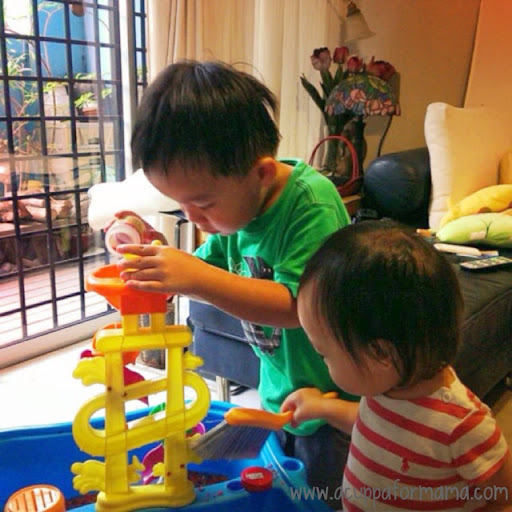 It can be a *huge* mess. But it is good for their sensory development, and they enjoy it very much.
at 00:48 No comments: 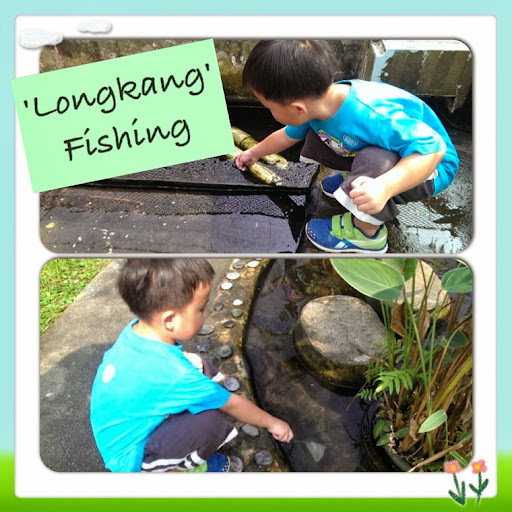 Brought the kiddos to do some longkang (drain) fishing the other day. Unlike back in the day, when kids used to fish in real drains for free, longkang fishing nowadays are more sanitised and commercial.

We first headed for Kids' Kampong, only to find out that they closed in December 2013. So we popped over to the nearby Mainland Tropical Fish Farm at 1 Pasir Ris Farmway 1.

Half and hour of fishing costs $4. We got a bucket and a small net to catch the fish with. Try as we might though, we ony caught one fish. They like to hide among rocks and plants and are really, really fast. A better tactic would have been to get two nets, and have one person chase them from their hiding place and the other person can then catch them as they try to get away from the first person.

Anyway, they don't actually give you the fish you caught. When we returned the bucket with our one lonely fish, we got a packet with 4 fish inside in exchange. I guess that's so that children won't be disappointed going back empty-handed when they did not manage to catch anything. I am not sure, but I would think that they would give you all the fish you caught if you caught a lot.

We also bought a packet of feed at $1 to feed the koi with. Both Little Man and Little Lady preferred to practice their fine motor skills by pushing the pellets through the netting, rather than to toss them over to the fish. 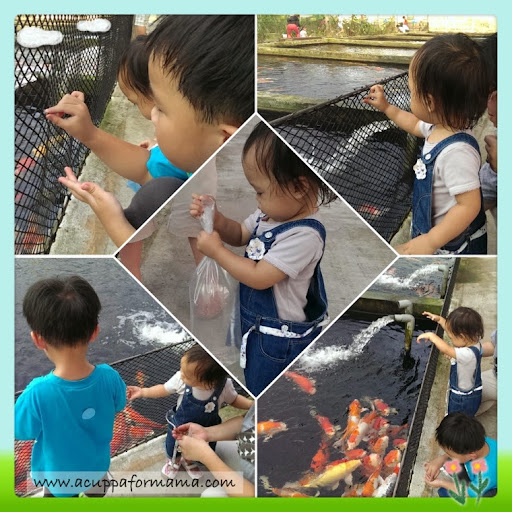 All in, it was a pretty fun couple of hours. 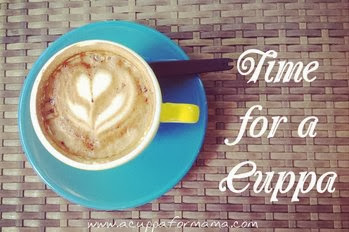 Email ThisBlogThis!Share to TwitterShare to FacebookShare to Pinterest
Labels: outdoor activity, Time For A Cuppa 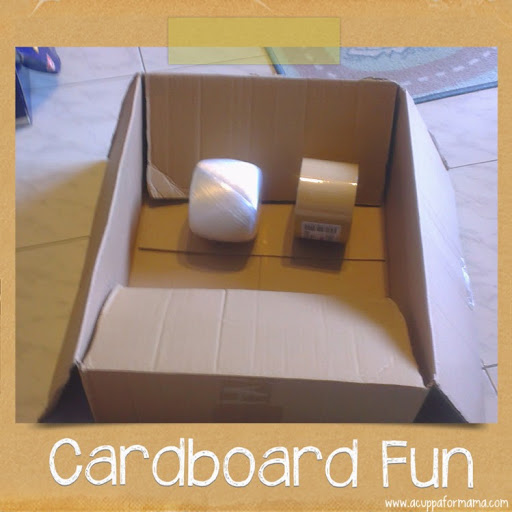 Ever since I became a mother, I horde odd things like empty toilet roll holders, empty bottles and empty boxes, convinced that they will prove themselves useful at some point or other.

Recently, we saw some chariots made from cardboard boxes at Little Man's school, and Little Lady was rather fascinated with them. 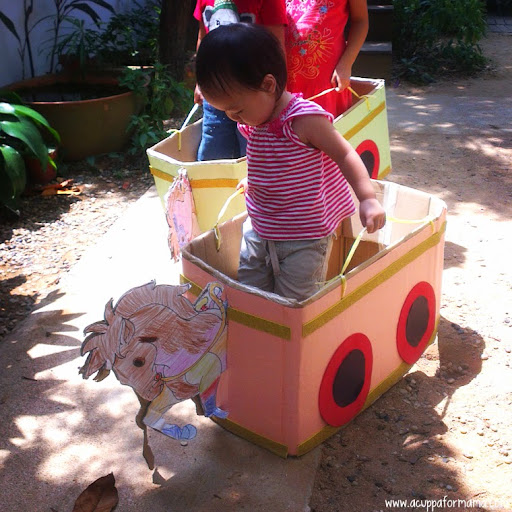 That inspired me to go through my horde and make something myself. I got out a cardboard box, some raffia string and tape. I folded all the flaps and taped them to the sides of the box. I used the raffia to make handles along the length of the box and viola! A cardboard vehicle! I had planned to add paper plates for wheels, and to draw in the doors and windows to turn it into a car, but Little Lady wanted to play with it immediately. 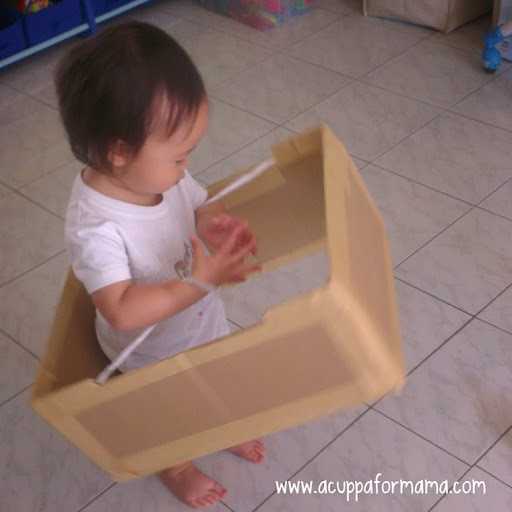 I then discovered that I did not have any paper plates and considered cutting circles out of construction paper for the wheels. By this time, however, the children have played with this as a car, a bus, a train and a boat. 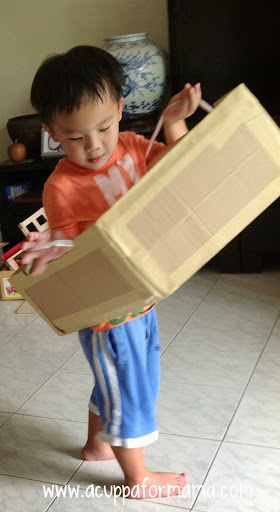 And even pretended to be a cat curled up in a box. 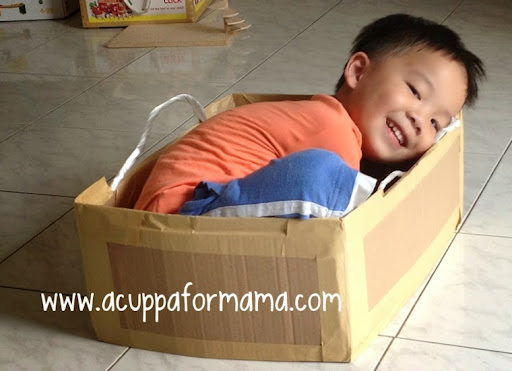 Since the box has proven itself to be very versatile on its own, sparking the children's imagination, I'm not going to decorate it, but will leave it as it is.

What fun have you had in your home with cardboard?

Time For A Cuppa {Linky} - Playing Together 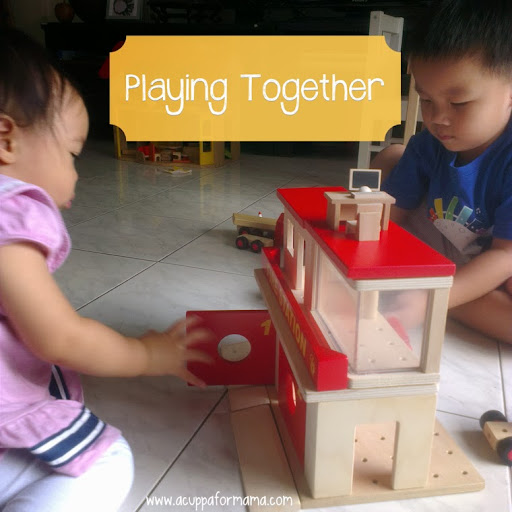 It's nice when the kids play nicely together.

It is not easy for a toddler and a pre-schooler to play together. Usually, Little Lady sees Little Man playing with something, and she wants in on the action. Either she helps herself to the item or items he is playing with, and he protests. Or she points at whatever he is playing with and clamours to have a go while he screams or goes 'No, Mei Mei (little sister)! No!' 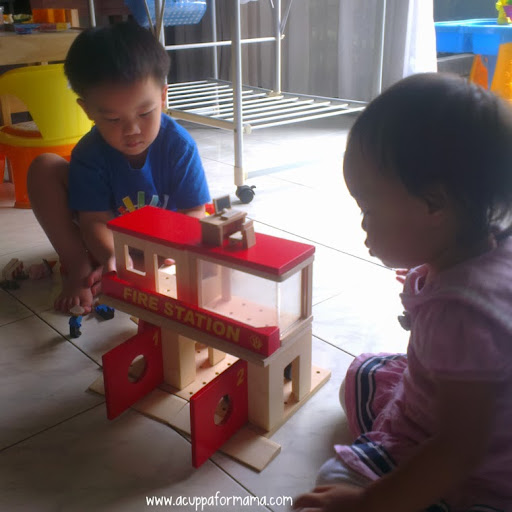 Sometimes, all Little Lady has to do is look in his direction to prompt loud 'No!'s or squeals of protest. 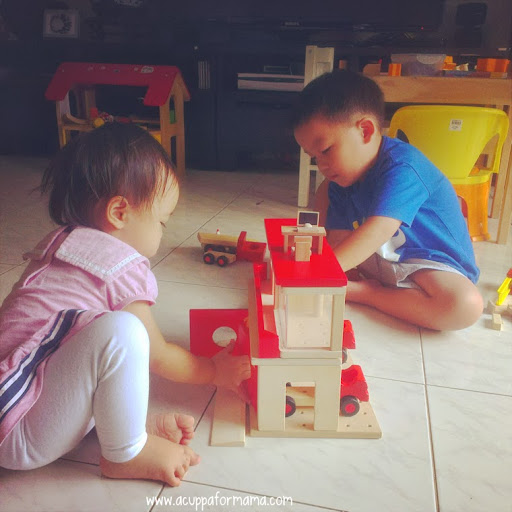 We did not want Little Man to always give in to Little Lady simply because he's 'older and should know better'. We did not want him to resent her. We didn't want to give her an entitlement complex either.

So we taught him to to offer her something else to play with, and taught her to wait until he was done with whatever he was playing with. 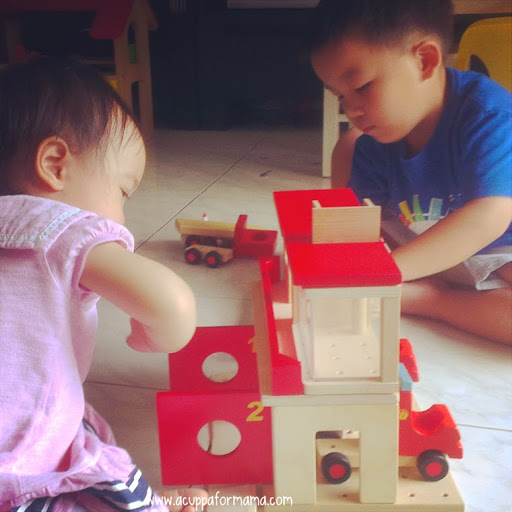 Every once in a while, Little Lady would be playing with something that would catch Little Man's fancy. He would then proceed to snatch it from her, which would, of course, result in her crying. Fair's fair, so Little Man had to learn to wait his turn too. 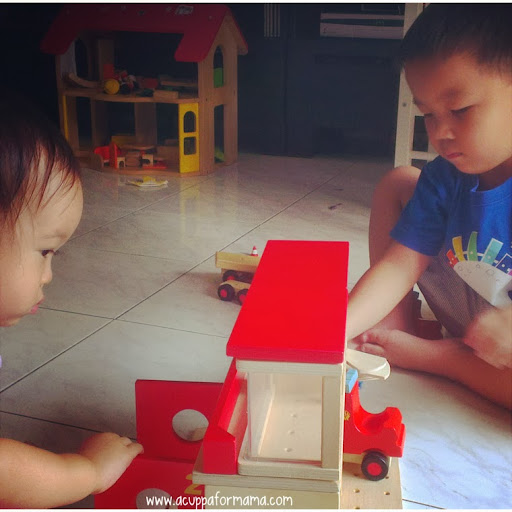 Sometimes he would anticipate that she'll want in on the action, and so he would pass her something even before he was all set to play. 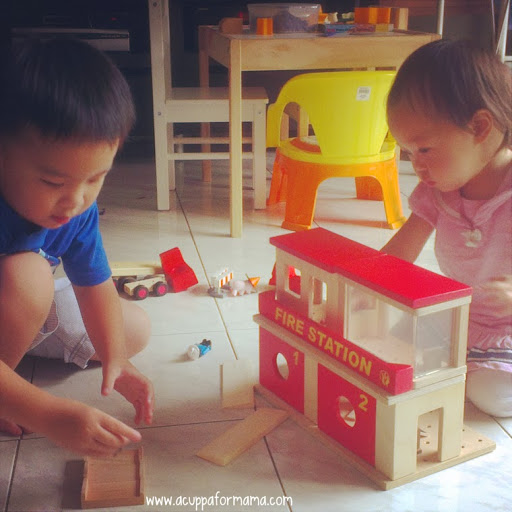 This time however, there was no negotiation involved. They both just played nicely with the same toy! Of course, it helps that this particular toy has enough bits and pieces to satisfy both.

Of course, they were engaged in parallel play, rather then cooperative play, as Little Lady is not developmentally ready for that yet. But it was still very nice to have them play quietly together. 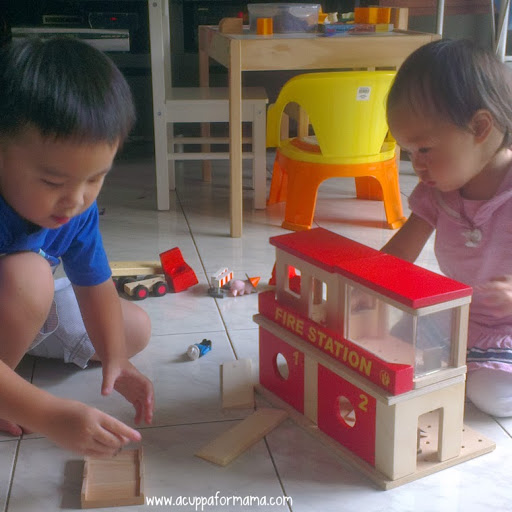 It was nice of them to let me in on the action too! :) 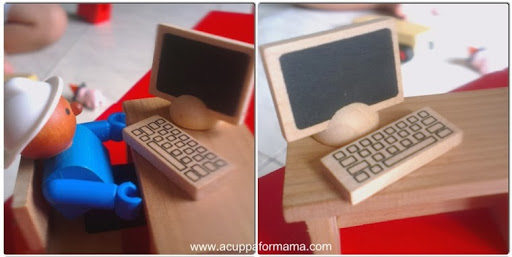 Email ThisBlogThis!Share to TwitterShare to FacebookShare to Pinterest
Labels: play, Time For A Cuppa

Recently, the beautifully written 'Mommy, Somebody Needs You' was making its rounds on my Facebook newsfeed. I identified with every single word almost every word (my two still co-sleep with us).

Being needed 24/7 is exhausting. It can be frustrating, having no time to call your own, especially when there is work to be done, or posts to write. One gets used to having an audience in the bathroom almost all the time; I haven't yet managed to convince Little Lady that it will be much more pleasant if she waited outside for me.

However, being loved and needed so much is also extremely sweet. I am also fully aware that being needed this intensely will not last forever, and although it may now feel like I'll *never* get any time to myself, there will come a day when I look back and realise just how fleeting these moments were, and how much I miss them. And so I resolve to truely embrace and treasure these moments, rather than look forward to when I have some time to myself. Or at least try my best to.

Little Man decides to help strengthen my resolve by growing up just a little bit more.

It started a few weeks ago, when he decided that he wanted to try sleeping in his underwear instead of diapers (At night. He's been diaper free in the day for some time now, even for naps). He's been very good about it too. He has only had one accident, but only because I was doing some work out of the bedroom, and he could not rouse his father to bring him to the toilet in time.

Last week, he walked down the stairs to school all by himself. The first time he did so, he was accompanied by a schoolmate who was encouraged by her mother to walk down on her own. The next time I sent him to school, he said that he wanted walk down by himself, always. 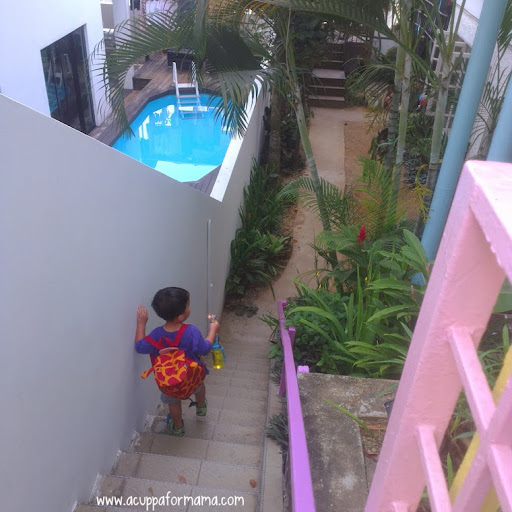 On Saturday, at the end of a visit to Grandma's, Little Man asked if he could have a sleep-over that night. Surprised, I said 'Of course!' We had broached the idea before, since Grandma is his secondary caregiver and he often has his afternoon nap there, but his answer then was a polite 'Not today.'

This time, he very readily and cheerfully bid us goodbye. He did really well too! Mum said he only woke once at 4:20 am and asked for me. He accepted her explanation that it was too late for me to go and pick him up. He managed to talk her into letting him play until 5am, though! Lol. I am soooo proud of him! This was his first night he has slept away from home without me. And only the second time he's spent the night away from me! (The first time was when I was had Little Lady.). Well done, Little Man! Mummy's so proud of you!

I guess it's always a little bittersweet for parents when our children grow up and become more independent? On the one hand, I'm so proud of him, on the other hand, I wish he could stay little for just a while more... How conflicting! I guess that's why the saying that we need to give our children both roots and wings come from.
Have your Little Ones shown more independence recently? How do you feel about it?