The Little Man started school recently. Earlier than I had initially planned. I had intended to start him in 2014 after he turned had already turned three, and had already secured him a place for a kindergarten in Jan 2014. However, he has been a little bored at home, and I can't give him as much attention as he wants with the Little Lady around. I also need to start him in school so that I'll have some time to contribute to the household income.

Some time last year, before I delivered Little Lady, I went to look at a few places. Some were ok, some were not. I still remember the one place I wanted to look at, but left before I even stepped foot in it when I heard a teacher admonish a child who dared to speak to a friend while they were having a snack. The rest of the kids were eating in absolute silence. *shrudder*

I took him for a trial at a couple of places earlier this year. One looked really good on paper, but I didn't really like the way the teacher who was sitting in for the regular teacher, who happened to be away on sick leave, interacted with some of more active boys. Also, I felt that it was a little too regimented for the Little Man at this stage. He was clamouring to go home even before we were halfway through the half-day programme.

I was introduced to P&J while one of Little Lady's playdates, and was glad to find out that not only was it a true Montessori kindergarten (not just Montessorri inspired), it was between Our place and Mum's!

So I arranged for a trial and brought him along. He took to it like a fish to water. He painted, played with some puzzles, played with the rabbit, took instruction from the teacher really well and had great fun at the playground. He did not once ask to go home. 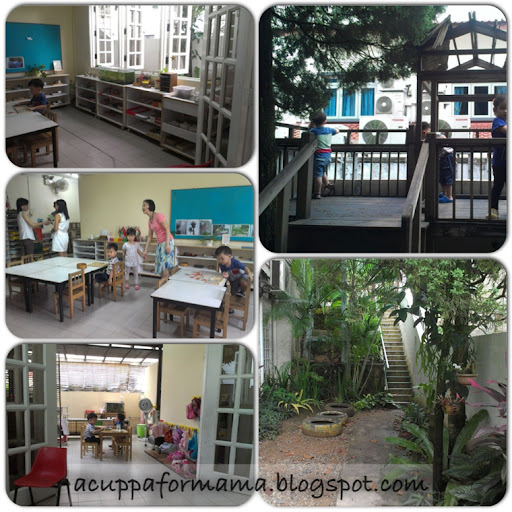 He started once the new term started. Another thing I like about this place is how progressively they introduce the children to being left in school. Newbies do not start on a Monday, but on the last two days of the week. On these two days, I was in school with Little Man for 2 hours. I basically let him do his own thing, but was there in case he wanted a hug or some reassurance. On Monday to Wednesday the following week, the Little Man was on his own, but only for an hour. The idea was for me to pick him before he could miss me much, and realise that I would be back for him. On Thursday and Friday, the plan would be for me to leave him for 2 hours. He would then be on his own for the full three hours from the following Monday onwards. Of course this only works when you have the luxury of time, which, fortunately, I did.

It worked a treat. It definitely helped that he was emotionally ready. Although he'd been fine whenever I left him at his Grandparent's when I had to work or run errands, as recently as 3 months prior, he would not let me leave his side when at his weekly class.

Although the Little Man did not cry in school, his anxiety does manifest in other ways. He has since started throwing objects again, and has acted up more at home. We just have to be patient while setting clear boundaries.


Working on a puzzle: 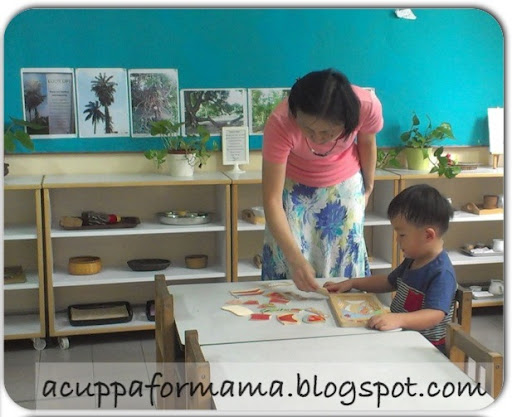 Changing from his 'outside shoes' into his 'inside shoes': 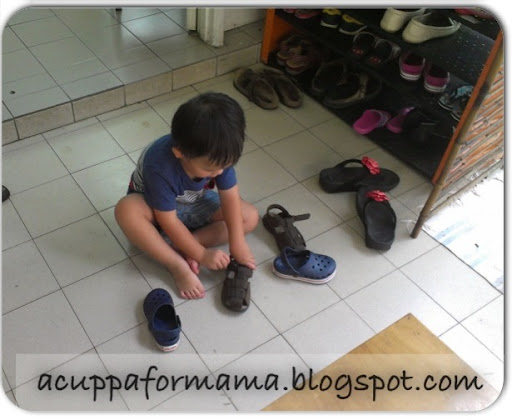 Having a snack with a friend: 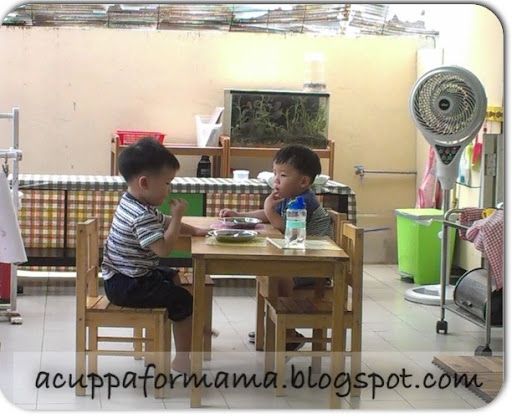 Learning to wash up after himself: 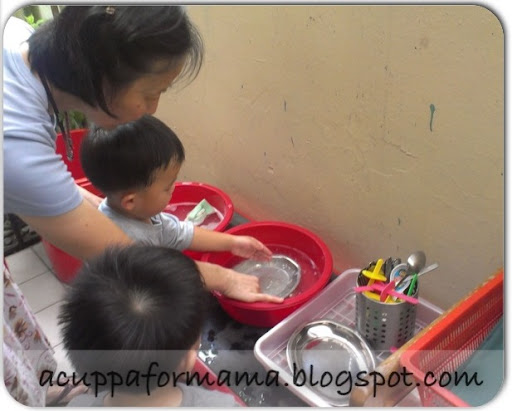 Sorting sizes on the pink tower: 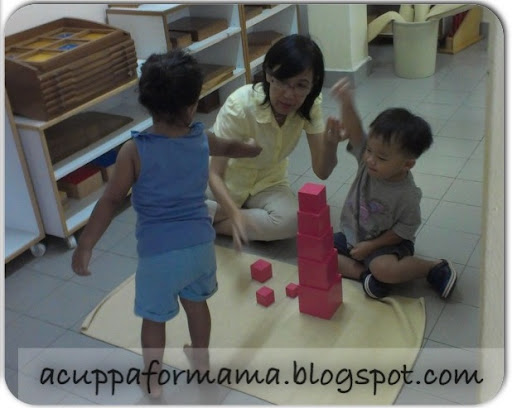 Working on another puzzle: 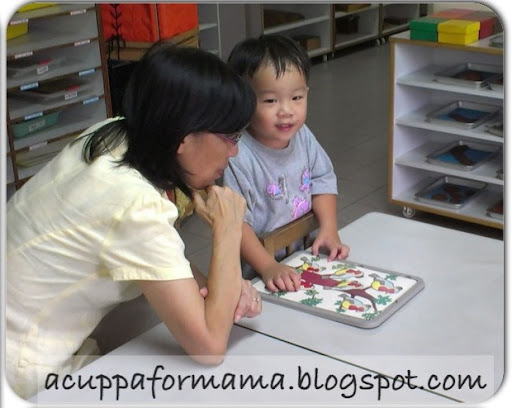 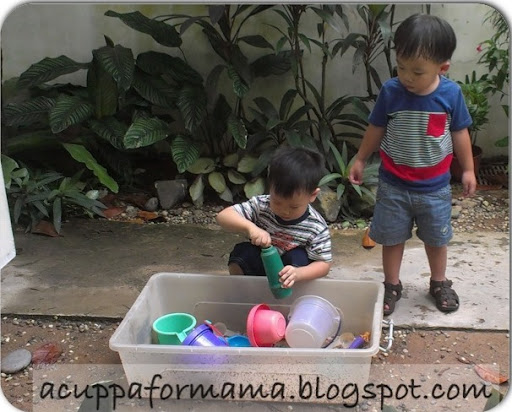 Figuring out how to open different boxes: 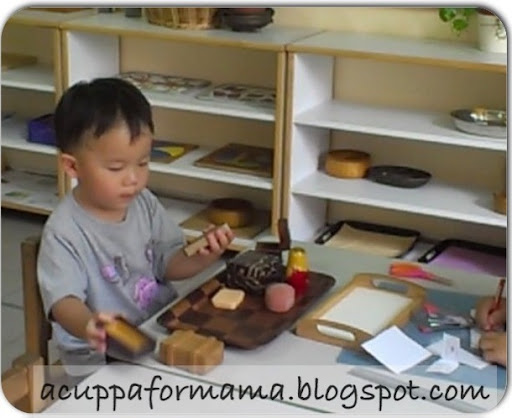 Two actions very typical of him - checking out the fan: 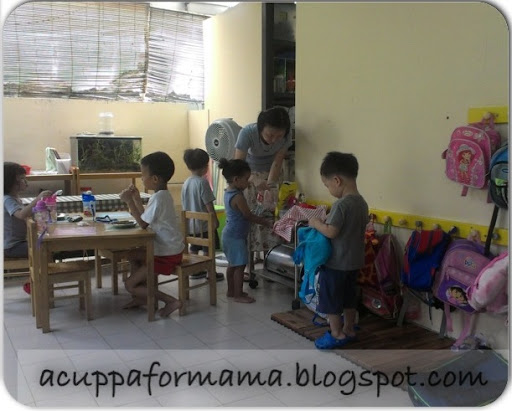 Looking at the compressors: 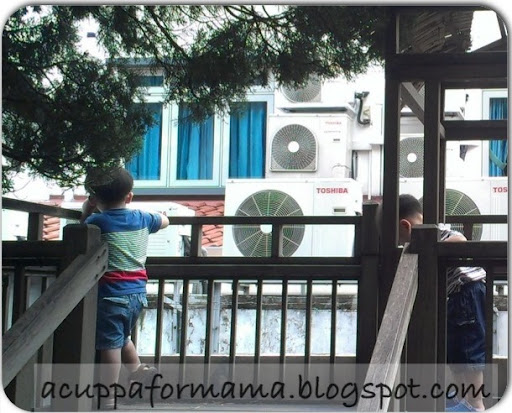