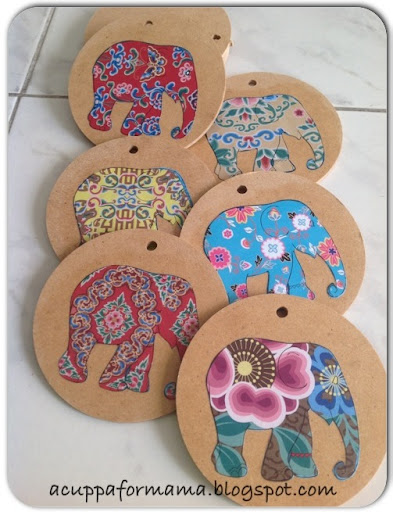 I recently made a matching tiles game for the Little Man. They are humongous, about 9cm in diameter.

I used some craft supplies i already had lying around for the circles. I believe they were from Spotlight. Unfortunately, I did not think to take not of the name of the item or take a photo before I made them. The elephants were from a roll of wrapping paper I also had lying around. I used white glue to adhere them onto the 'wooden' circles.

The Little Man likes his new game. He's gets the idea of finding matching pairs, but will uncover every tile till he finds one.

At this size, it is not very suitable as a portable busy bag, but I think it woud make a good game to play in a group, such as on a playdate. 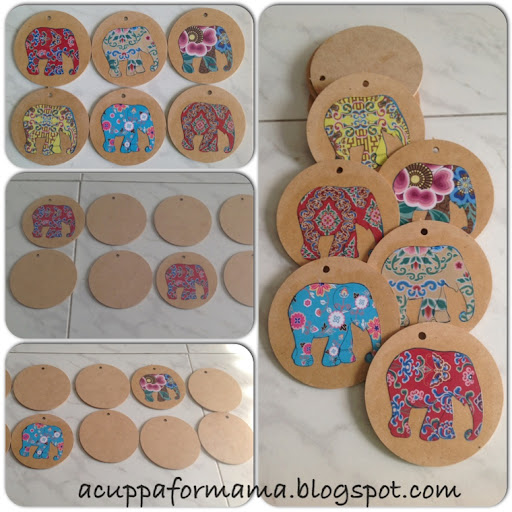 The Little Man loves to paint, so I thought I'd sneak some Maths into this session. Instead of using brushes this time, I provided him with objects from the recycle bin that had circular openings of different sizes. He's already familiar with the concepts of big, medium and small, bigger and smaller (Russian dolls are perfect for this), so this activity was partly for variety, and partly to reinforce these concepts. 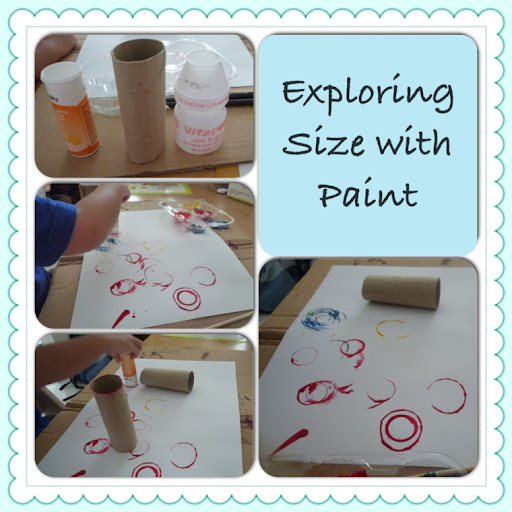 What resulted was a session of stamping fun.

I only took photos at the beginning of the session as the Little Lady was demaning to be fed. 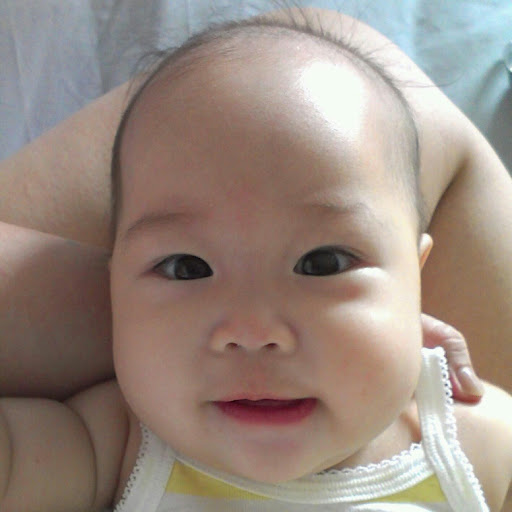 Has it really been 6.5 months since she was born? She's already experienced her first Christmas and her first New Year.

She's quite a serious baby. Dont get me wrong, she does smile quite a bit, but her hearty laughs are precious and reserved for a special few, like her brother.

I love to cuddle and smell her and shower her with kisses, which gets me rewarded with one of her hearty laughs.

She can currently flip both to her left and her right when on her back, although she prefers to flip to her right. She can flip from tummy onto her back too, but does not do that very often.

She is grabbing things left, right and centre, especially my specs and my nose.

She loves her brother and laughs at his antics.

She much prefers her brother's toys (trains, tracks) to her own (which actually used to be his)..

She loves to talk to the cat.

She enjoys sitting in her activity centre and can entertain herself there for some time, which is great, because it gives me time to do stuff like go to the loo. 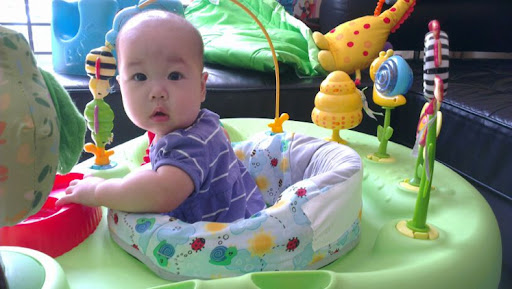 Her eyesight is quite good and she can recognize people from quite a distance.

She can pass things from one hand to the other.

She loves to clasp her hands together, just in time for the Lunar New Year!

She hasn't quite got the hang of eating. Even if I leave the spoon in her mouth for a little longer for her to suck at the spoon, more comes out of her mouth than what was put in - food plus saliva. Her meals at moment end up with a fuller bowl than when we started.

She can sit quite steadily on her own, although she hasn't yet figured out how to push herself up to a seating position.

She is able to creep backwards, and practices getting on her hands and knees daily. She can also get into the military 'push-up' position (hands and feet). 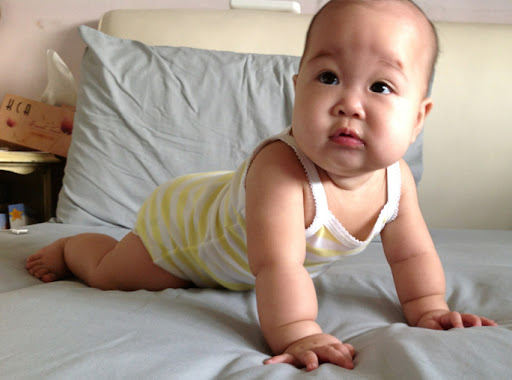 She can propel herself forwards on occassion.

She is also very verbal and thus 'complains' a lot.

Comparison to her brother at around the same age (or what I can recall, which is not much):
She is much more verbal and mobile than he was. However, he figured out eating more quickly and had drunk out of a straw by now.

She loves the carrier as much as her brother did. She could be fussing, but will quieten if she sees me putting on the carrier or pouch sling.

She loves to investigate whatever her brother is doing which elicits a "No, no, no, Meimei (Little Sister) no!"

Little Lady, Mama loves you to bits. Grow up well, healthy and strong, ok?
at 02:05 No comments:

She Ain't Heavy, She's My Sister 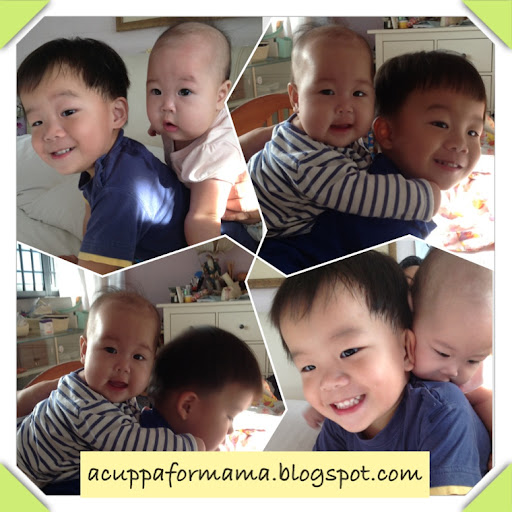 The Little Lady absolutely adores her big brother, and the feeling is mutual. 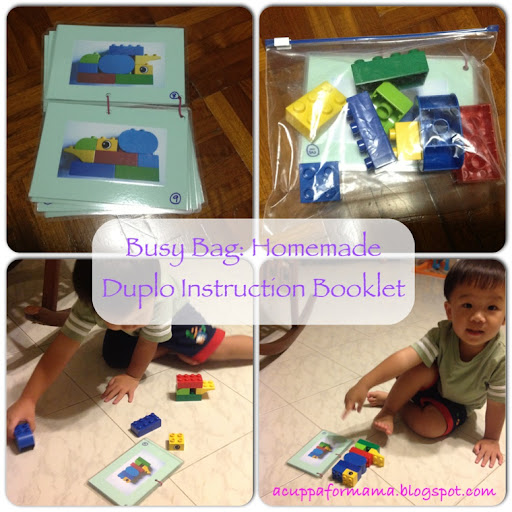 I am always on the lookout for Busy Bag ideas, as I want to cut down on technological babysitting when we're out and about. (And sometimes I want to use the gadget myself.)

I had seen this idea on Pinterest previously, and wanted to make something similar for the Little Man, do that he could develop the skill of following patterns and instruction (visually). I held back as I was not sure if he was ready for it. However, he beat me to it by copying the picture on the box of his building blocks.

Since it is obvious that he is ready, I took some of his Duplo pieces, assembled them in various combinations and photographed them. I then printed them out in colour, mounted them onto some cardstock and laminated them. Next, I punched holes in the cards and bound them with treasury strings. I made two different sets, and put each set, with the corresponding blocks, into zip-top bags. Only one set is pictured here.

I had included some simpler combinations with fewer blocks, but he completely bypassed them and went straight for the combinations that used all the blocks.

As I intended for these to be busy bags, I did not print them life-sized (my bag is already big and full enough as it is). However, when the Little Man was assembling the combinations, I noticed that he often placed the Duplo pieces directly on top of the picture to compare them. But as the picture is smaller than the actual pieces, they often obscured it. In the end, it did not prevent him from completing the task, nor did it frustrate him in any way whatsoever. But, it is something you might want to take into consideration.

He was very interested in it when I first presented it to him and immediately chose a picture to follow. He made three combinations before he was willing to start his bedtime routine after a long day. 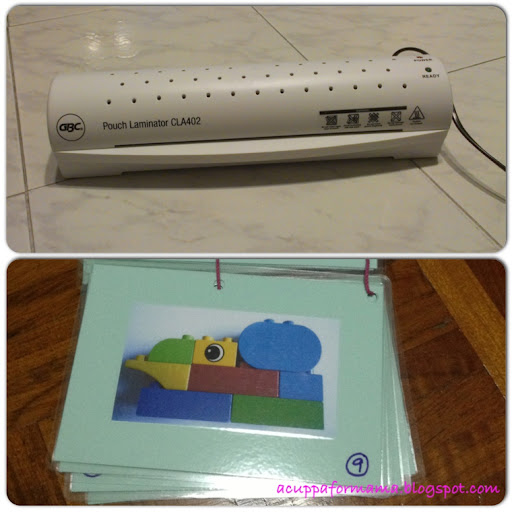 For Christmas, I asked for and received a laminator from The Husband. So now I can go wild making and laminating learning aids for the Little Man (provided I can find the time to do so).

The first project I used it for was to make laminated Duplo instruction cards. It was a blast! I had so much fun preparing and laminating. It fed my need to craft / make things, and brought me back to the time when I was a young and enthusiastic teacher making teaching aids.

It's really compact and a lot smaller than the ones I've previously used in my former school. However, I doubt if I'll need to laminate anything really large. Also, because it is so compact, it will take up practically no space in my home! Yay! Thanks, Hubs!


Posted via DraftCraft app
at 11:26 No comments:

A baby and playdough 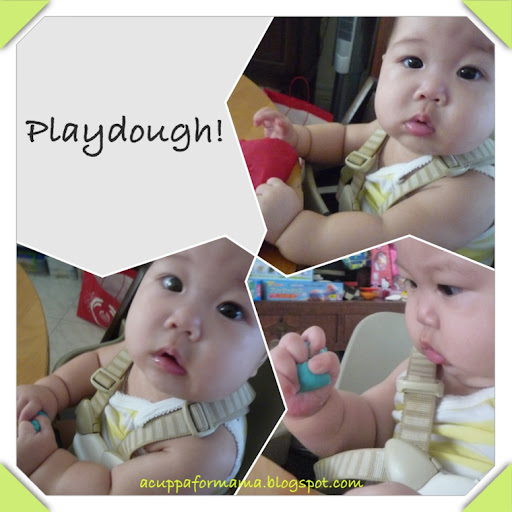 The Little Lady likes to do anything her big brother does, so she decided to get in on the playdough action too! She had lots of fun squeezing it, tearing small pieces off a big glob, and dropping them on the floor.

Playing with playdough has the same benefits for babies as for toddlers - strengthening hand and finger muscles, engaging her sense of touch and experience of textures. Most importantly, it is FUN! 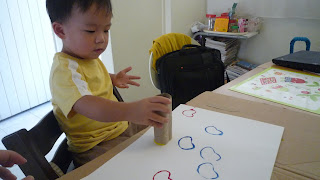 This is a very easy art activity to do with toddlers. Cheap too! Simply take an empty toilet roll, use a fingernail (I used my thumbnail) to create an inward crease in the toilet tube. The Little Man used it to stamp away to his heart's content and it was then used to make Grandma's birthday card. Of course, I did not take a photo of the completed card. 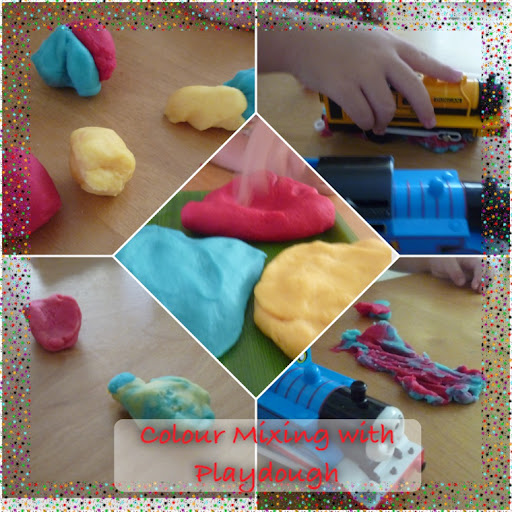 So the Little Man has been very interested in colours recently, especially in mixing colours, primary and secondary colours. His favourite colour at the moment is purple, and he loves mixing red and blue paints together to get it.

For some variety, I decided to let him play with colours via playdough rather than paint. This way, I can get him to strengthen his hands at the same time.

So I made up a batch of rose scented playdough in the three primary colours, using t he same recipe I used in this post. I used A LOT of red colouring, and only managed to get a dark pink. I could have used more yellow food colouring for a more vibrant yellow, I guess. He had a hard time waiting for the playdough to be cool enough for him to handle.

When it was finally time to play with it, I put roughly the same amounts of two different primary colours together for the Little Man to mix together. However, he was only interested in the red and blue combination as he knows that will result in purple. As you can see from the pictures, he has his own way of mixing them together as well, with the help of Thomas and Duncan. 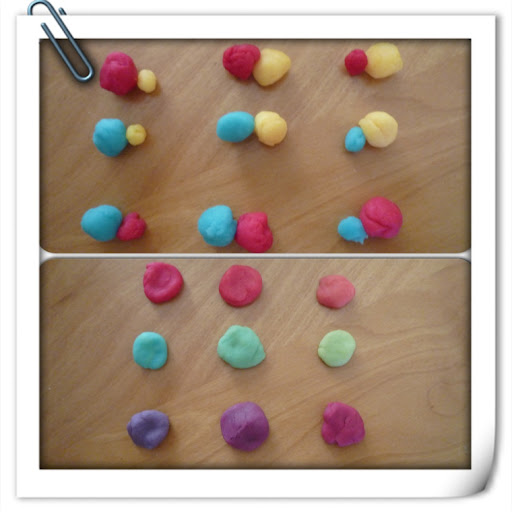 I also got in on the fun by mixing together different proportions of colours for different shades of orange, green and purple.