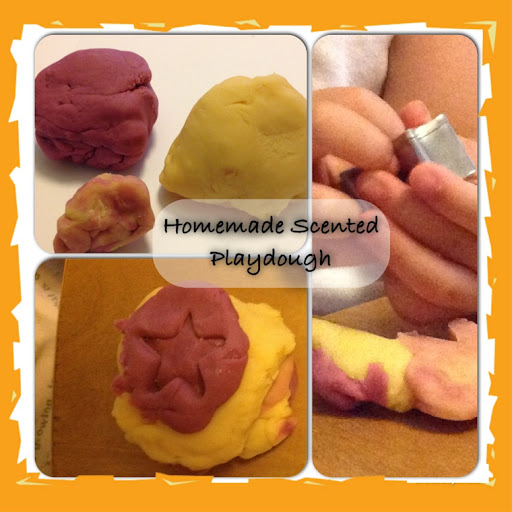 I finally made up a batch of playdough for the Little Man. At playgroup, he has finally warmed up to manipulating the bread dough, rather than watch me do it, so I thought he might enjoy playing with playdough. I could have bought some store-bought playdough, but what stopped me was the memory of the smell of store-bought which I dislike (not sure if things have changed since), and the memory of cooking up playdough when I assisted in a kindergarten many, many, many years ago. So I searched throught the internet and found a wealth of playdough recipes! There is a basic/classic one which I based my recipe on, and put my own little twist on it, just because. 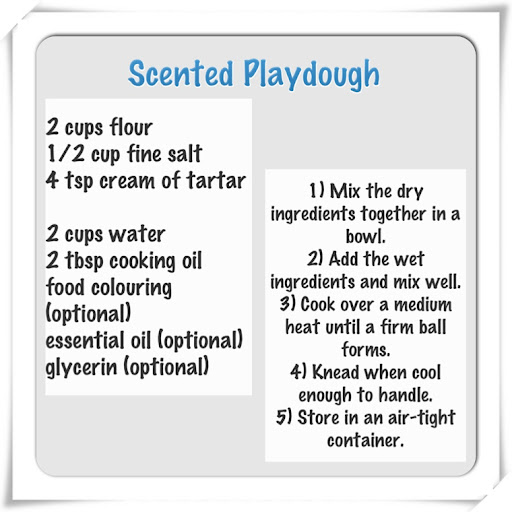 The above recipe calls for cooking, but if you have no wish to cook, just replace the 2 cups of water with 2 cups of boiling water. At least, that is the only discernible difference I could gather from the recipes I see online. I haven't tried it myself, though, so don't take my word for it. This recipe though, is wonderfully smooth and I love playing with it too, and my hands smell heavenly afterwards. The glycerin is supposed to make the colour nice and shiny. As I have not made a batch without it yet, I can't make a comparison.

I used the above recipe, but halved it to make two different colours, purple, his favourite colour for the moment (it used to be green), and yellow. For the purple, I mixed red and blue foor colouring, more red than blue, as a little blue goes a loooooonnnng way.

I wanted to engage not only the Little Man's sense of touch, but his sense of smell as well, so I added a few drops of essential oil to the ingredients. To the purple batch, I added some Lavender pure essential oil, and to the yellow, I added some Chamomile. I'll add Rose to red playdough next time. You could always add seasonal scents, for example pepermint for Christmas and so on.

The Little Man most enjoys combining the two colours at the moment. He has fun using cookie cutters and using the playdough to cover his trains as well.