Welcome to the world, Little Girl! 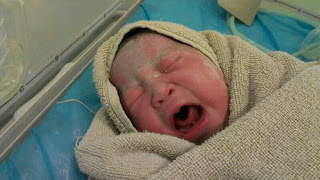 Someone decided to make an early appearance.


The Little One was rather anxious to make her appearance.  She was born on the day she turned 36 weeks via a natural birth (VBAC) with no epidural, about 40 minutes after we arrived in the hospital.

Friday 6 July 2012
I had my 36 week gynae check-up in the morning.  Everything was a-ok, and I was given an appointment to go back a week later for CTG monitoring.


Saturday 7 July 2012
I was awoken in the morning by the girl doing yoga inside. It was accompanied by some abdominal cramps that felt like menstral cramps that came and went.

Never having experienced contractions before, I googled "contractions" and downloaded a contraction timer app and timed my cramps. I monitored the pain for about 3 hours, and they were coming every 5 to 10 minutes, and lasted from between 45 seconds to 2 minutes.


The pain/discomfort was bearable, but I still wasn't sure if they were contractions, so I called the gynae's clinic at about 12noon to ask what contractions were. When the told that they were coming every 5 to 10 minutes, I was asked to go to the hospital for CTG monitoring.

Interestingly, during the drive, the pain got more bearable and less frequent. At the labour ward, they hooked me up to the CTG machine for an hour but could not detect any contractions, even though I could feel the pain (no longer merely discomfort at this point in time) and said that I was probably just experiencing cramps. I asked how to differentiate between cramps and contractions and was told that for contractions, the whole tummy would be painful, not just the lower abdomen/bikini line area. Also, the whole tummy would harden, not just parts of it, which was probably due to baby doing yoga inside. They discharged me and The Hubby and I had lunch at Delifrance. I commented to The Hubby that if the pain and discomfort I felt were merely cramps, I don't think I could handle contractions.

So we went back home where I tried rather unsuccessfully to rest.  We went over to my in-laws' for dinner, and my cramps got more intense.  In addition, I was feeling a dull backache with each cramp.  However, as it still only involved my lower abdominal and was not accompanied by a hardening of the tummy, I disregarded them.

At home, I asked The Hubby to put The Little Man to bed, as the periodic pain was rather distracting, and I did not want to worry the boy who would get upset if I say "ow" too much. I managed to doze off in front of the TV for a bit, but was awoken every now and then with cramps and the need to pee.

I decided to turn in early, but did not manage to get much sleep as I kept waking up due to the cramps. Going to the toilet to pee did help relieve the cramps, as did sitting on the toilet. So I tried sleeping sitting up as well. I did manage to doze off, but was getting extremely annoyed as I was not getting any quality sleep. As time went by, the pain got worse, and I was trying my best not to wake Evan up with my getting up and down, and the groaning in pain.

Sunday 8 July 2012
As I sat on the toilet during one of the episodes, I thought to myself that I was going to wake The Hubby up and ask him to send me to the hospital, just to get pain medication so that I could get some sleep. It was about then that I noticed that I had some show. So off to the hospital we went.

The Hubby suggested dropping Little Man off at his parents', but I could not wait that long to get pain relief, so I said to bring him along. In the end, we brought The Help along with us as well.

At the Delivery Ward of the hospital, I was asked if I wanted an epidural, to which I replied with a resounding "YES!"   I was also asked to change into a hospital gown, but I declined as I really needed to lie down.  The midwife came along and checked my cervix.  When the first nurse informed her that I wanted an epidural, she said that it was too late, and to wheel me into the Delivery Room. Shocked, I asked her how dilated I was, and was told that I was already 8cm.

So the CTG monitor came off, and I was wheeled into the Delivery Room.

By now, I was definitely feeling the pain of the contractions, and was breathing in the only pain relief available to me at this point - nitrous oxide. I can't remember if they hooked up the CTG to me or not. I'm sure they did, so that they could monitor the baby, but I just have no recollection. I blame the nitrous oxide.

In between contractions, The Hubby came in to check on me, and I could hear The Little Man wailing in the background (Good thing we brought The Help along with us in the end), so I asked him to go out to calm him down.

After a while, Dr Kee came in, checked my cervix, said I was ready and asked me to try pushing. I was not having a contraction at the time, but tried pushing anyway. Apparently, the baby decended one to two inches in that push alone. Dr Kee then called The Hubby and told him to come in as the baby would be born within the next 5 to 10 minutes.  The Hubs came in, and I remember Dr Kee breaking my waterbag and feeling the rush of warm water. Then came a contraction and I was asked to push. The only problem was, I did not know how to push. I had not attended any prenatal classes, and The Little Man was delivered via emergency C-Section without my feeling any contractions, despite being 3cm dilated when Dr Kee checked me. I did not feel any urge to push either. I was more concerned with bearing with the pain. So the midwife had to coach me on when and how to push, to work with the feeling, rather than against it. After a couple of pushes, I felt the head come out, which relieved a lot of the pain. I was asked to hold on (not push) for a while. When I was asked to push again (I assume I had another contraction), I did, and the baby was out.

The nurses cleaned the baby up, weighed and measured it and prepared the Certificate of Live Birth while I delivered the placenta and Dr Kee stitched me up - a small tear, according to Dr Kee, though he did ask for another length of suture.

While waiting to be transferred to my ward, I latched baby on and she sucked like a champion.  The Hubs also called Mum up in Perth to let her know the news. As she had not even been in Perth for 24 hours, and since both the baby and I were perfectly fine, I told her not to rush back.

Eventually, I was wheeled out of the Delivery Ward and met up with The Little Man,  The Help and my PILs, whom The Hubby had initially called to bring the Little Man to their place.

After I was settled in my room (527), everyone went home and I tried to get some rest, but I was too wide awake for that.


I'm really glad that I managed to give birth naturally after my previous emergency c-section.  Recovery was a lot easier.  I was up and about within hours.  Although the stitches (and eventually piles) caused some pain and discomfort, it was mild compared to the pain of my c-section wound.

Although the Little Girl was only 36 weeks along (officially pre-mature), she was of a good weight (2.73kg) and passed all her tests and did not need to be in the NICU at all.

Welcome Little Girl!
(In case you're wondering, we have not decided on her name yet.)
at 23:43